As the racers leave the low desert, three things come to mind. The first being the change in scenery as the desert vistas give way to the vistas filled with greenery. The next thing that will fill the racers minds are the two major climbs looming ahead. The Yarnell grade climbs 1800 feet in 7 miles. It’s hot, it’s long, it’s steady, it’s curvy, it’s the Yarnell Grade. The California and Arizona heat by now will have done a number on the racers but the cool of the night will be rejuvenating to the racers. 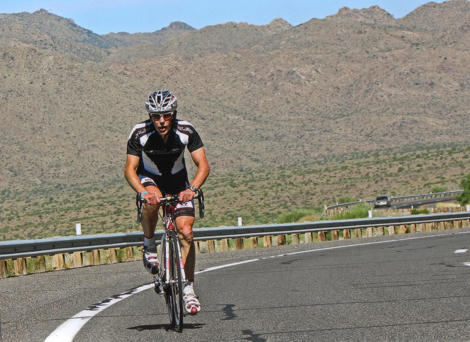 The racers will pass through Wilhoit, which is literally the center of Arizona where the second climb begins. The climbs in this segment are more than 130 feet per, which is the most challenging climbing the racers have faced.

The climbs will take the riders into Prescott, which is nestled at an elevation of 5,200′ feet above sea level amongst the largest stand of Ponderosa pine forests in the U.S.. Prescott provides breathtaking landscapes complete with granite mountains, lakes, streams, and rolling meadows filled with wildlife.

Once the capital of the state, Prescott is rich with history embodied in its world famous Whiskey Row and abundant historical landmarks. Prescott provides a rich history related to Wyatt Earp, Doc Holliday, and cowboy forays in the most famous saloons of the Old West.  Upon arriving at TS07, the racers will have completed 441.1 miles with 2,552.4 miles to go. Continue

The race continues the upward trend as the racers gently climb 1300+’ over the 52 mile segment. From Wenden and Aguila the road is almost straight with unchanging scenery, and if the racers squint they might see Annapolis in the distance.

Wenden, Arizona is considered the “Gateway to Alamo Lake” and home of the famous “Buzzard’s Roost”. Rich in old gold mines, rockhounds love to explore the “Outback” of Wenden. The unspoiled beauty of the land surrounding Wenden is evidenced by the designated wilderness areas of the Harquahala Mountains. The picture below was taken near the foothills of the Harquahala Mountains, just east of Wenden.

Aguila, Arizona is on the eastern edge of the Arizona Outback – located on Highway 60 approximately 20 miles west of Wickenburg, in Maricopa County. Aguila lies in a beautiful fertile valley just north of the Harquahala Mountain Range and boasts of growing the world’s finest Cantaloupes. Aguila’s name is tied to Eagle Eye Mountain which lies in the Harquahala Mountain Range. The racers may be able to spot Eagle Eye Mountain as they zip through Aguila. “The Harquahala Mountains are the highest mountain range in southwestern Arizona and are located southwest of the towns of Aguila and Wenden. The name originated from a local Native American people “Aha qua hala” which meant “water there is high up”. Eagle Eye Mountain has a natural opening or bridge through it appearing as an eye high up, and is the namesake for the peaks and Aguila (Spanish for eagle)”. As the racers exit Aguila they will be heading northeast and roll into Congress, AZ.  Gold was discovered in Congress in 1884. By 1893, the Santa Fe Railroad passed within three miles of the mine, at Congress Junction. Congress boomed, and remained prosperous until the mid-1930s, when the mines closed. Total gold production at the Congress Mine exceeded $8 million, at the then-current price of $20.67 per ounce—or about $400 million, at the 2007 price. Once in Congress, the racers will have completed 395.0 miles, with 2,598.6 miles to go. Continue

As the racers leave Parker, they are also leaving the Colorado River valley, which is irrigated agricultural land, and slowly and steadily climb back up to the lower desert of southern Arizona. This 56 mile segment climbs 1778′ and follows routes 95, 72 and 60 as the racers head southeast through the desert. Once the racers arrive in Salome, AZ they  have about 100 miles before they reach Prescott, AZ. Once the racers pass through time stop 5, they will have completed 342.3 miles with 2,651.2 miles to go. Continue

After racing for roughly 270 miles, the course continues to follow the Colorado River northward until the first bridge where the team crosses into Arizona. As the teams cross the river, they will be entering Mountain Standard Time (MST) and leaving Pacific Standard Time (PST) behind. On the Arizona side of the river the racers will be on the Colorado River Indian Reservation. This segment continues to slowly climb out of the desert with a slight 1000′ elevation gain over the 51 mile leg of the race. There won’t be much to see, other than desert, once the racers leave Blythe until they reach Parker, AZ. Once the racers hit Time Stop 4 they will have traveled 286.3 miles, with 2,707.2 miles to go to Annapolis. Continue

From below sea level south of the Salton Sea the racers follow SR 78 across drifting sand dunes to the Colorado River valley. At mile 15, the course comes the closest to the Mexican Border (19.5 Miles). About 25 miles after leaving Brawley, the racers will slowly start to gain elevation on their way to Blythe, CA. At mile 44.7, the racers will be subjected to a US Border Patrol Inspection. If i forget my id, does that mean I have to ride all the way back to Oceanside? At about the 60 mile mark, the racers will see the Colorado River for the first time and will start tracking along the river as they head north. When they reach Blythe the team will have completed 234.9 miles with 2,758.6 miles to go. Continue

As the racers ascend over 5700+ feet, the conditions get drier and hotter. The flora changes from trees to cactus in the first third of this segment. The reward for the sustained climbing just completed is the The “Glass Elevator”. The Glass elevator provides vistas of the valley and allows the racer to rest a bit as they descend from an elevation of 4200’+ to 630′ over approximately 12 miles. With some 30mph hairpins, the descent provides quite its own challenge. Once in the valley, in Borrego Springs, the race heats up, literally. The really good news, is there is often a tailwind at this point in the race. The racers are now in the desert and headed toward the Salton Sea, home of the Sonny Bono Salton Sea National Wildlife Refuge. As the racers skirt along the southern shore of the Salton Sea, they can focus on the next time check in Brawley, CA. The racers also will have descended to below sea level as they traverse the desert. Continue

The race rolls out from Oceanside, CA pier on June 14th, 2014 and heads down the strand and through the neighborhoods for 7-8 miles. At this point the race begins. TS01 is in Lake Henshaw, CA and is 50.8 miles from the start.  As the racers leave the west coast, the rural residential roads morph into sustained mountain climbs. It doesn’t take long before the climbing begins. The first climb starts at about the 3 mile mark as the racers exit the Oceanside and its suburbs and climbs towards Mt. Palomar. This segment has 5762 feet of gradual, but continual climbing toward Lake Henshaw at TS01. The reward for this climbing will be the descent down the glass elevator on the way to TS02. Continue

Many of you have asked, what is RAAM? To give you a preview of what the racers will be facing, we will be posting information about this 3000 mile race over the next few weeks. RAAM begins in Oceanside, CA and finishes in Annapolis, MD. The race passes through 12 states, 88 counties and 350 communities. The climbing over the distance is about 170,000 vertical feet. Portions of the race go through the desert and climb to over 10,000 feet in the Rockies, so temperatures will range from 100+ to lets just saying freezing. In the past racers experienced riding in a snow storm, much like this year’s Giro d’ Italia. Stayed tuned for updates to these posts as we will take you from the start line through each of the 54 time stops to the Finish line. Our team is in full training mode with our base miles complete and the interval sessions have begun. We hope you follow our journey as we “Ride the White Line.” Next Post will be the Start through time stop #1, Lake Henshaw, CA. Continue 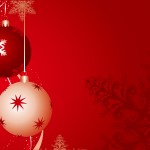 HCycling wishes our family, friends and supporters a Very Merry Christmas. We wish everyone a prosperous and Happy New Year filled with many blessings and dreams realized. Keep on pedaling!!!